I published a blog on Pesticides and Alzheimer’s in mid February. Now there is another  new study indicates exposure to pesticides might increase the risk for Parkinson’s disease (PD). 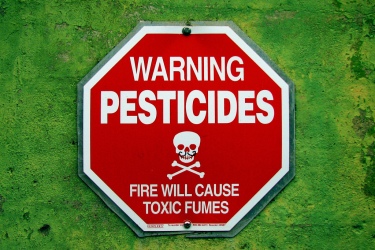 The study, published in the February 4, 2014, issue of Neurology, reports that pesticides can raise PD risk by up to 6 times.  Having a particular genetic predisposition would raise that risk.

What is also alarming is that anyone within 500 meters of where a pesticide is being sprayed would show signs of significant exposure, through inhalation or ingestion, according to Dr. Jeff Bronstein, MD, PhD, professor, neurology, and director, Movement Disorders, David Geffen School of Medicine, University of California at Los Angeles.

And organic pesticides aren’t as safe as they may seem either. Samuel Frank, MD, associate professor, neurology, Boston University School of Medicine, Massachusetts, and member of the American Academy of Neurology describes rotenone as an example, which he said is considered an organic pesticide but is still sold in nurseries. “If you go into PubMed, you’ll find that it’s a toxin used to induce Parkinson models.”

To be safe, select organic foods whenever possible. If you have your own garden, grow your own vegetables. When it comes to the food you eat, use common sense. Wash (if possible, scrub) all produce and trim the fat off of meat before eating. If you are wondering if you should buy organic produce, the general rule of thumb is to buy organic (the dirty dozen) if you are eating the peel (like you would with apples, peaches and peppers). If you won’t be eating the outer skin or peel (as would be the case with pineapple, mango, and sweet corn), you can save some cash and buy conventional produce.

2 Responses to Pesticides And Parkinson’s Disease